About the Book Club:

Join us to discuss current affairs in the US and around the world. Future topics will include the environment, racism, economic and gender inequality, and workers' rights. This group meets monthly on the last Sunday of the month, at 4pm. Purchase the books below and use coupon code BOOKCLUB20 for 20% off at checkout!

Begin Again: James Baldwin's America and Its Urgent Lessons for Our Own by Eddie S. Glaude

NEW YORK TIMES BESTSELLER • James Baldwin grew disillusioned by the failure of the civil rights movement to force America to confront its lies about race. In our own moment, when that confrontation feels more urgently needed than ever, what can we learn from his struggle?

“In the midst of an ugly Trump regime and a beautiful Baldwin revival, Eddie Glaude has plunged to the profound depths and sublime heights of Baldwin’s prophetic challenge to our present-day crisis.”—Cornel West

We live, according to Eddie S. Glaude Jr., in a moment when the struggles of Black Lives Matter and the attempt to achieve a new America have been challenged by the election of Donald Trump, a president whose victory represents yet another failure of America to face the lies it tells itself about race. From Charlottesville to the policies of child separation at the border, his administration turned its back on the promise of Obama’s presidency and refused to embrace a vision of the country shorn of the insidious belief that white people matter more than others.

We have been here before: For James Baldwin, these after times came in the wake of the civil rights movement, when a similar attempt to compel a national confrontation with the truth was answered with the murders of Medgar Evers, Malcolm X, and Martin Luther King, Jr. In these years, spanning from the publication of The Fire Next Time in 1963 to that of No Name in the Street in 1972, Baldwin transformed into a more overtly political writer, a change that came at great professional and personal cost. But from that journey, Baldwin emerged with a sense of renewed purpose about the necessity of pushing forward in the face of disillusionment and despair.

In the story of Baldwin’s crucible, Glaude suggests, we can find hope and guidance through our own after times, this Trumpian era of shattered promises and white retrenchment. Mixing biography—drawn partially from newly uncovered interviews—with history, memoir, and trenchant analysis of our current moment, Begin Again is Glaude’s endeavor, following Baldwin, to bear witness to the difficult truth of race in America today. It is at once a searing exploration that lays bare the tangled web of race, trauma, and memory, and a powerful interrogation of what we all must ask of ourselves in order to call forth a new America.

The Fire Next Time by James Baldwin

"Basically the finest essay I’ve ever read. . . . Baldwin refused to hold anyone’s hand. He was both direct and beautiful all at once. He did not seem to write to convince you. He wrote beyond you.” --Ta-Nehisi Coates

A national bestseller when it first appeared in 1963, The Fire Next Time galvanized the nation, gave passionate voice to the emerging civil rights movement—and still lights the way to understanding race in America today.

At once a powerful evocation of James Baldwin's early life in Harlem and a disturbing examination of the consequences of racial injustice, the book is an intensely personal and provocative document from the iconic author of If Beale Street Could Talk and Go Tell It on the Mountain. It consists of two "letters," written on the occasion of the centennial of the Emancipation Proclamation, that exhort Americans, both black and white, to attack the terrible legacy of racism. Described by The New York Times Book Review as "sermon, ultimatum, confession, deposition, testament, and chronicle...all presented in searing, brilliant prose," The Fire Next Time stands as a classic of literature.

About the Club Coordinator:

I am the only daughter of Romeo and Betty Grenier. My father founded the Odyssey in 1963. In 1985 while I was taking the GRE exam the Odyssey burned to the ground. In 1986 the Odyssey was once again the victim of an arsonist. My Dad was 76 at the time and I agreed to help out for a while. Well, somehow “a while” turned into decades and I decided not to pursue graduate school and instead took a different path of lifelong learning. My reading interests are varied. I love literary fiction, Scandinavian mysteries, American history and politics, nature, food, and environmental writing, and now that we have three granddaughters, I am thoroughly enjoying classic and new children’s books.

Begin Again: James Baldwin's America and Its Urgent Lessons for Our Own (Hardcover) 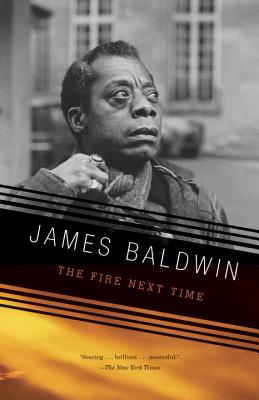