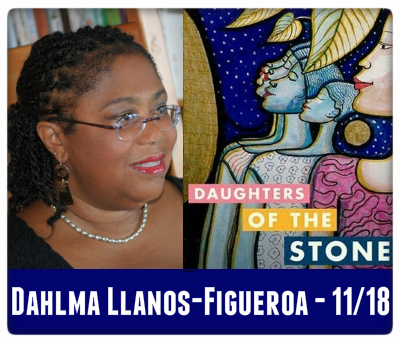 WHERE: The Odyssey Bookshop


Dahlma is the author of the historical novel, Daughters of the Stone which details the lives of five generations of Afro-Puerto Rican women from the eighteenth to the twentieth century. Through the eyes of characters Fela, Mati, Concha, Elena and Carisa, the book examines the legacy passed from one generation to the next. Namely, what legacy does a woman who owns nothing, not even her own body, leave for her daughter? What happens to a storyteller when she can no longer tell her stories? And, can one build a future without coming to terms with the past?


Dahlma Llanos-Figueroa was born in Puerto Rico and raised in New York City. She is a product of the Puerto Rican communities both on the island and in the South Bronx. She attended New York City public schools and got her academic degrees from SUNY-Buffalo and Queens College. As a child she was sent to live with her grandparents in Puerto Rico where she was introduced to the culture of rural Puerto Rico, including the storytelling that came naturally to the women, especially the older women in her family. Much of her work is based on her experiences during this time. Dahlma taught creative writing, language and literature in the New York City school system before becoming a young adult librarian. She has also taught creative writing to teenagers, adults and senior citizens while honing her own skills as a fiction writer and memoirist. She currently serves as an adjunct professor at Hunter College in Manhattan.


We request that attendees purchase a copy of Daughters of the Stone from the Odyssey Bookshop in order to join the book signing line.