Mount Holyoke College celebrates Black History Month with social media expert, New York Times best-selling author, and pop-critic, Luvvie Ajayi.  Sponsored by the Association of Pan-African Unity, Mount Holyoke African and Caribbean Students Association, and the Division of Student Life.
Mount Holyoke continues to celebrate Black History Month, which is coordinated by the Association of Pan-African Unity (APAU) annually through programs which honor African and black American ancestry, recognizing the present, and reflecting on the future. This year, APAU is collaborating with the Mount Holyoke College African and Caribbean Students Association and the Division of Student Life to bring social media expert, New York Times best-selling author, and pop-critic Luvvie Ajayi.
Luvvie Ajayi is an award-winning author, speaker and digital strategist who thrives at the intersection of comedy, technology, and activism.
A fourteen-year blogging veteran, she is the voice behind Awesomely Luvvie, a widely-respected humor blog that covers everything pop culture – from TV, movies, and technology to travel, race and life’s random adventures.
It was her blog that inspired Luvvie’s debut book, I’M JUDGING YOU: The Do-Better Manual, which was released in September 2016, and instantly hit the New York Times best-seller’s list. It is a collection of essays that critique our fame-obsessed, social media-centric lives while encouraging us to do better. The book is the good, yet snarky, angel on your shoulder, in word form.
The drive to leave the world better than she found it is the foundation of her work with The Red Pump Project, a nonprofit she co-founded with Karyn Brianne Lee. Since March 2009, Red Pump has empowered women and girls of color about HIV/AIDS. As Executive Director, Luvvie leads a national organization that is committed to empowering and driving the conversation to decrease the stigma associated with the HIV epidemic. Red Pump’s work has earned them a Congressional Record from the U.S. House of Representatives and Resolutions by the Illinois State Senate as well as the City Council of Chicago.
Luvvie’s work as a culture critic and activist has brought her much acclaim. She was selected as a part of Oprah Winfrey’s inaugural Supersoul100 list in 2016, as someone who “elevates humanity.” She was voted as the Influencer of the Year at the 2016 Iris Awards and was chosen as a 2015 Black Innovator by XFINITY Comcast. She is also a past winner of the Women’s Media Center’s Social Media Award for using her voice and humor for pop culture critique and gender and racial justice.
She’s been on the cover of ESSENCE Magazine and has been featured by The New York Times, Good Housekeeping, Forbes, Fortune, NPR, Inc, Marie Claire, Chicago Sun-Times, Africa.com, AOL.com, Black Enterprise, The Root and more. As a writer and columnist, Luvvie has contributed to Vulture, EBONY and Uptown Magazine. 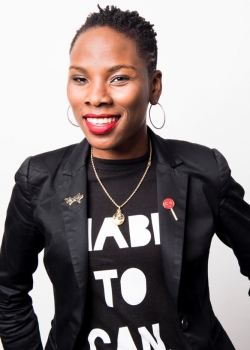 The University of Illinois alum is a sought-after speaker, host, and correspondent who leverages her background in marketing, communications and new media. She has interviewed bosses like Oprah Winfrey, Geena Davis, Gloria Steinem and Shonda Rhimes. She has spoken on several notable stages in the U.S. and around the world, including The White House, MAKERS Conference, Pennsylvania Conference for Women, SXSW, Social Media Week (Nigeria, South Africa), U.S. Embassy Port-au-Prince (Haiti) Techne Summit (Egypt), National Association of Black Journalists Conference, among others.
With her background and love for marketing, communications and new media, Luvvie created and Awesomely Techie. It’s a resource site for entrepreneurs, small business owners and everyday people who want to use technology to make their work and personal lives more efficient.
Her love language is shoes. Her superpower is her side-eye.
P.S. “Ajayi” is pronounced just like it’s spelled. AH-JAH-YEE.
Event date:
Thursday, February 22, 2018 - 7:30pm
Event address:
Mount Holyoke College
Gamble Auditorium
South Hadley, MA 01075