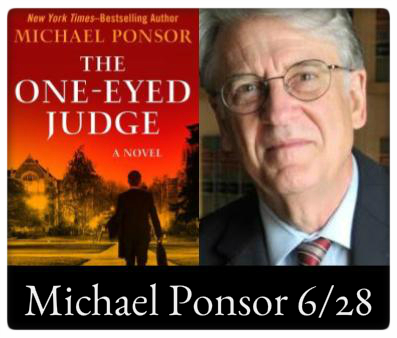 Event: Michael Ponsor, The One-Eyed Judge
When: Wednesday, June 28, 7:00pm
Where: The Odyssey Bookshop
When FBI agents barge into Sidney Cranmer's home accusing him of a heinous crime, the respected literature professor's life becomes a nightmare. Cranmer insists the illicit material found by the agents isn't his, but the charge against him appears airtight, and his academic specialty--the life and work of controversial author Lewis Carroll, creator of Alice's Adventures in Wonderland--convinces investigators he's lying.
Presiding over the case against Professor Cranmer, U.S. District Judge David Norcross fears his daily confrontation with evil has made him too jaded to become a husband and father. His girlfriend, Claire Lindemann, teaches in the same department as the defendant and is convinced of his innocence. Soon, she will take matters into her own hands. Meanwhile--with his love life in turmoil and his plans for the future on hold--a personal tragedy leaves Norcross responsible for his two young nieces. Unbeknownst to him, a vengeful child predator hovers over his new family, preparing to strike.
Michael Ponsor's debut novel, The Hanging Judge, was praised by retired Supreme Court justice John Paul Stevens for reminding readers "that the judicial process is not infallible" and by Pulitzer Prize-winning author Tracy Kidder for bearing "the heft of authenticity." The One-Eyed Judge again draws on Ponsor's thirty years as a US district judge, offering readers an insider's view of one of the most harrowing kinds of cases faced by the courts. Fast-paced, thrilling, and thought-provoking, this is legal fiction at its most realistic and compelling.
The One-Eyed Judge is the 2nd book in the Judge Norcross Novels, but you may enjoy reading the series in any order.
Michael Ponsor graduated from Harvard, received a Rhodes Scholarship, and studied for two years at Pembroke College, Oxford. As an undergraduate, he spent a year teaching in Kabete, Kenya, just outside Nairobi. After taking his law degree from Yale and clerking in federal court in Boston, he began his legal career, specializing in criminal defense. He moved to Amherst, Massachusetts, in 1978, where he practiced as a trial attorney in his own firm until his appointment in 1984 as a US magistrate judge in Springfield, Massachusetts. In 1994, President Bill Clinton appointed him a life-tenured US district judge. From 2000 to 2001, he presided over a five-month death penalty trial, the first in Massachusetts in over fifty years. Judge Ponsor continues to serve as a senior US district judge in the United States District Court for the District of Massachusetts, Western Division, with responsibility for federal criminal and civil cases in the four counties of western Massachusetts. The One-Eyed Judge is his second novel featuring Judge Norcross.
Event date:
Wednesday, June 28, 2017 - 7:00pm
Event address:
The Odyssey Bookshop
9 College Street
South Hadley, MA 01075