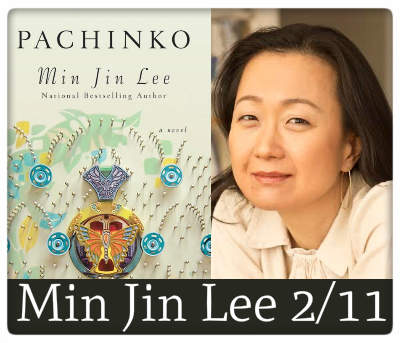 The Odyssey Bookshop is delighted to host former First Editions Club selected author Min Jin Lee for her latest novel, Pachinko!
PACHINKO is a tour de force following one Korean family through the generations, beginning in early 1900s Korea with Sunja, the prized daughter of a poor yet proud family, whose unplanned pregnancy threatens to shame and ruin them. Deserted by her lover, Sunja is saved when a young tubercular minister offers to marry and bring her to Japan. So begins a sweeping saga of an exceptional family in exile from its homeland and caught in the indifferent arc of history. Through desperate struggles and hard-won triumphs, its members are bound together by deep roots as they face enduring questions of faith, family, and identity.
There is a long and troubled history of legal and social discrimination against Koreans living in Japan, even those who have partial ethnic Korean background. Some never disclose their heritage, although it can follow them in their identification papers and government records. While writing PACHINKO, Min Jin (who herself was born in Korea before moving to the United States) lived in Japan with her husband and son and interviewed dozens of ethnic Koreans about their family histories. Min Jin wanted to acknowledge their stories when so much of their lives had been denied, erased and despised.

Pachinko is a popular type of adult pinball game, which originated in Japan in the first half of the twentieth-century. Those who run and operate pachinko parlors, many of them of Korean ethnicity, are looked down upon socially, but some parlors can generate immense fortunes. Many Korean-Japanese families today have some original ties to the pachinko industry. Struggling to find their place in Japanese society, Sunja’s family finds work in the pachinko business and attempts to build their lives in a new land.

MIN JIN LEE’s debut novel, Free Food for Millionaires, was one of the “Top 10 Novels of the Year” for the Times (London), NPR’s Fresh Air, and USA Today. Her short fiction has been featured on NPR’s Selected Shorts. Her writings have appeared in Condé Nast Traveler, Times (London), Vogue, Travel + Leisure, Wall Street Journal, New York Times Magazine, and Food & Wine. Her essays and literary criticism have been anthologized widely. She served as a columnist for Chosun Ilbo, the leading paper of South Korea. She lives in New York City with her family.