Okey Ndibe, author of Never Look an American in the Eye: A Memoir of Flying Turtles, Colonial Ghosts, and the Making of a Nigerian American 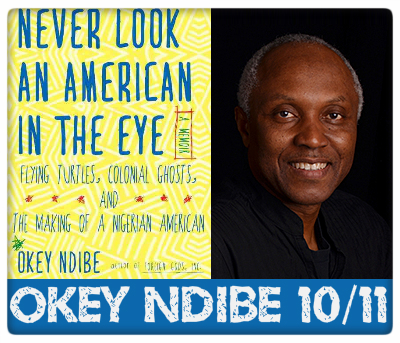 EVENT: Okey Ndibe, author of Never Look an American in the Eye: A Memoir of Flying Turtles, Colonial Ghosts, and the Making of a Nigerian American
WHEN: Tuesday, October 11, 7:00 pm
WHERE: Odyssey Bookshop

The Odyssey Bookshop is delighted to welcome back Okey Ndibe to read from his new memoir Never Look an American in the Eye: A Memoir of Flying Turtles, Colonial Ghosts, and the Making of a Nigerian American.

Okey Ndibe is the author of Foreign Gods, Inc. and Arrows of Rain tells his own immigrant’s tale, where what is lost in translation is often as hilarious as it is harrowing. The title of Okey Ndibe’s third book and first memoir, Never Look An American In The Eye  refers to a bit of advice offered to the young journalist in the days before he journeyed from Nigeria to the U.S. “Never look an American in the eye,” his uncle advised, “Americans can’t stand any stranger looking them in the face. They take it as an insult. It’s something they don’t forgive. And every American carries a gun. If they catch you, a stranger, looking them in the face, they will shoot.” This of course was horrific news to the young man who up to that point had been walking among the clouds.

His hero, the great Chinua Achebe himself, had procured travel, schooling, and a position as the founding editor for a soon-to-be influential (if always fiscally fraught) magazine Ndibe was to run from, of all places, the United States. But Achebe had mentioned nothing of the deadly manners of America. Like many of the stories in this book the reality was somewhat different than its initial portrayal. In the 1970s and 80s, as part of the effort to keep much of Africa out of communist control, the CIA began showing American cowboy movies, often free of charge, in countries like Nigeria. The goal was to make the U.S. look cool and heroic. In the case of Okey Ndibe’s uncle these psy-ops programs instead fashioned a different vision of the American, courtesy of the Old West. It wasn’t until he was actually in the U.S. that Okey Ndibe learned anything about what real Americans were like. Or that he had more to fear from a New England winter than mustachioed gunslingers.

Always charming and often laugh-out-loud funny, Okey Ndibe’s memoir is full of hard-won wisdom about the immigrant experience and the ever-shrinking world in which we live.

Okey Ndibe first came to the US to act as founding editor of African Commentary, a magazine published by Chinua Achebe. He has taught at Brown University, Connecticut College, Simon’s Rock College, Trinity College, and the University of Lagos (as a Fulbright scholar). He is the author of two novels, Arrows of Rain and Foreign Gods, Inc., and his award-winning journalism has appeared in The New York Times, The Guardian, and the Hartford Courant.Okey Ndibe lives in West Hartford, Connecticut, with his wife, Sheri, and their three children.

Never Look an American in the Eye: A Memoir of Flying Turtles, Colonial Ghosts, and the Making of a Nigerian Amiercan (Hardcover)