Sunil Yapa, Your Heart is a Muscle the Size of a Fist 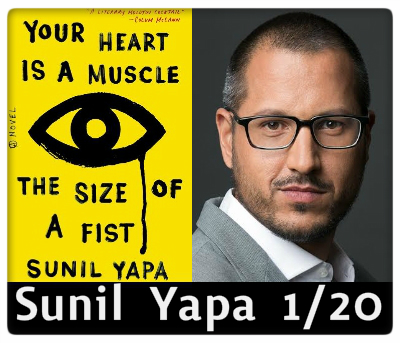 Event: Sunil Yapa, Your Heart is a Muscle the Size of a Fist
When: Wednesday, January 20, 7:00 pm
Where: The Odyssey Bookshop

Our first First Edition Club pick for January is the raw and breathtaking novel, Your Heart is a Muscle the Size of a Fist, is an electrifying debut novel set amid the heated conflict of Seattle's 1999 WTO protests. On a rainy, cold day in November, young Victor--a nomadic, scrappy teenager who's run away from home--sets out to sell as much marijuana as possible to the throng of WTO demonstrators determined to shut down the city. With the proceeds, he plans to buy a plane ticket and leave Seattle forever, but it quickly becomes clear that the history-making 50,000 anti-globalization protestors--from anarchists to environmentalists to teamsters--are testing the patience of the police, and what started out as a peaceful protest is threatening to erupt into violence. In this raw and breathtaking novel, Yapa marries a deep rage with a deep humanity. In doing so he casts an unflinching eye on the nature and limits of compassion, and the heartbreaking difference between what is right and what is possible.

Sunil Yapa received his MFA from Hunter College, where he was awarded the Alumni Scholarship & Welfare Fund Fellowship and was selected twice as the Esquire Fiction Intern. In June 2010, he won the Asian American Short Story Award. In May 2010, Yapa was the writer-in-residence at the Norman Mailer Writers' Colony in Provincetown, Massachusetts. The son of a Sri Lankan father, and a mother from Montana, Yapa grew up in Pennsylvania, and has since traveled and lived in 48 states and 35 countries.