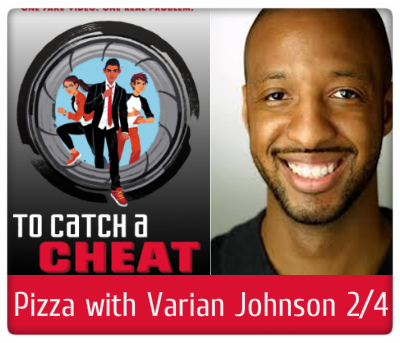 The Odyssey Bookshop welcomes you to come nosh on FREE PIZZA with Varian Johnson, awesome author of The Great Greene Heist and its sequel, To Catch a Cheat on Thursday, February 4th at 6:00 PM. He’ll boggle your mind with the scoop on all the scheming in this new novel starring middle school mastermind and con-man Jackson Greene and his gang of talented friends. This event is appropriate for ages 8 and up!

This time around, Jackson and Co. receive a link to a faked security video that seems to show them flooding the school gym. The culprits behind the video threaten to pass it to the principal--unless Jackson steals an advance copy of the school's toughest exam. So Jackson devises a three-part plan to foil the blackmailers, clear his friends' names for good, and trap the true bad guys along the way. As Gang Greene executes another multistep caper full of twists and turns, they learn that sometimes it takes a thief to catch a cheat.

Varian Johnson is the author of four novels, including THE GREAT GREENE HEIST, a Publishers Weekly Best Summer Book of 2014. His novels for older readers include MY LIFE AS A RHOMBUS, named to the Texas Library Association Tayshas High School Reading List and the New York Public Library "Stuff for the Teen Age" list, and SAVING MADDIE, a Bank Street College of Education Best Children's Book. Varian was born in Florence, South Carolina, and attended the University of Oklahoma, where he received a BS in Civil Engineering. He later received an MFA in Writing for Children and Young Adults from the Vermont College of Fine Arts. Varian now lives outside of Austin, TX with his family.